A private company limited by shares provides all the advantages of registration and is a good medium for operating and managing enterprises so long as, generally, the activity in which it is engaged is small, the owners of the business are a few persons related closely or otherwise associated to each other and the resources required for managing the business are either exclusively provided by the owners or met partly by the promoters and partly from outside borrowings. In course of time the private limited company may find it advantageous to expand its business which may need large financial resources. It may be necessary for this purpose for the private limited company to convert itself into public and draw resources by offer of its securities to the public and also get financial assistance from financial institutions and banks more freely. Private Company may be first step

There may be occasions when, even where a mega project is proposed to be undertaken requiring large resources. The promoters may find it expedient first to register the company as a private limited one and convert it into a public limited company as a suitable stage after registration. During the said interim period the promoters may find it easy and convenient to carry on with the preliminary formalities as a private company.

There are a large number of companies which are small and which are of interest only to members of a family or to close associates. Their scope is limited and they are bound to continue as private limited companies for a long time.

Conversion of private into public

Where it is proposed to convert a private limited company into a public one, the following steps shall be taken :

(a) The board of directors shall accord approval to the proposal and call a general meeting to get the approval of members by special resolutions to delete the restrictive conditions as per section 3(1) (iii) in the articles and to modify the articles in other respects and to delete the word “Private” from its name.

(d) In terms of section 44, within 30 days of the conversion of the private limited company to public by deletion of the conditions of section 3(1) (iii), the company shall file a statement in lieu of prospectus containing the particulars of Schedule IV to the act.

(e) On and after the resolution to convert the company is passed, please ensure that there are at least three directors on the board.

A specimen notice sent to members calling a general meeting for the conversion into a public limited company.

Where necessary, the company after conversion into a public company shall take steps to increase its authorized and paid-up capital to at least Rs.5 lakhs as per section 3.

Public issue after conversion from private into public

Where the company, after converting itself from private to public, proposes to offer shares to the public and get its shares enlisted in a stock exchange. It will be necessary for the company to get the approval of members to the proposal by a special resolution in terms of section 81(1A).

In certain circumstances a public limited company may find it desirable to convert itself into a private limited company. One of the circumstances may be that its members may entirely and substantially comprise of a few persons who are closely related to associated to each other and that its business is such that it will be advantageous to carry on as a private limited company. Such a proposal cannot become effective unless it is approved by the central government. The Central Government has delegated its power to the registrars of companies vide notification GSR No.281 (E) dated 21-3-1995.

The following actions shall be taken in respect of the said proposal :

(a) The board of directors will consider the proposal at a meeting and resolve by a resolution that, subject to necessary approvals under section 31. The company shall be converted into a private limited company and will include the word “Private” before the word “Limited” in its name.

(b) The board will organize a meeting of members by giving notice of at least 25 days under section 173. This is for insertion of the word “Private” in its name and also for making suitable changes in the AoA.

(c) The board will, at the same meeting of the board, authorize severally a director and the secretary to move an application to the registrar of companies concerned for this approval after the proposal is approved at the general meeting by a special resolution.

(d) After conclusion of the general meeting, file certified copies of the special resolutions with the explanatory statements with the registrar within 30 days of passing of the resolutions in terms of section 192.

(g) The company will change the name in all documents by inserting “Private” before the word “Limited”.

Section 43A deleted by amendment act 2000

A deemed public company ceases to be so from the day the companies (Amendment) Act, 2000 came into effect as per the procedure laid down. Consequently if the articles of the erstwhile deemed company retained the conditions required to be specified in section 3(1)(iii), it may revert back as a private limited company. When a deemed public company so reverts, as a private company, it shall inform the registrar of companies in terms of sub-section (2A) that it has become a private limited company.

Thereupon the registrar will :

(a) insert the word “Private” in its name in his register.

(b) make necessary alteration in the certification of incorporation.

(c) make necessary change in the Memorandum and Articles within four weeks of the receipt of the application.

Proviso under section 31 not applicable

The above change does not attract the proviso under section 31(1) and does not need the prior approval of the central government for change over from public to a private company.

Insertion of the word “Private” – Whether approval under section necessary ?

As the change-over is authorized by new sub-section (2A) and erstwhile sub-section (2), one view is that the alteration of the name by insertion of the word “Private” does not need the prior approval of shareholders under section 21. Where the articles of the deemed public company continued to have its articles the conditions of section 3(1) of the act.

For any business entities registration in Coimbatore visit here

For registration of a company in Salem visit here

Company Registration and any other incorporation details in Madurai visit here 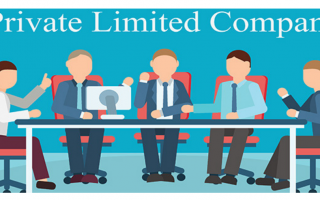 How do you register a Private limited company in Chennai?